In response to RFP-7, we would like to submit Node Pilot for funding consideration. Node Pilot is a Linux executable that allows anyone to deploy and manage Pocket Validators and other blockchain nodes. Seamless Docker integration brings enterprise-level security and scalability to any level of user. 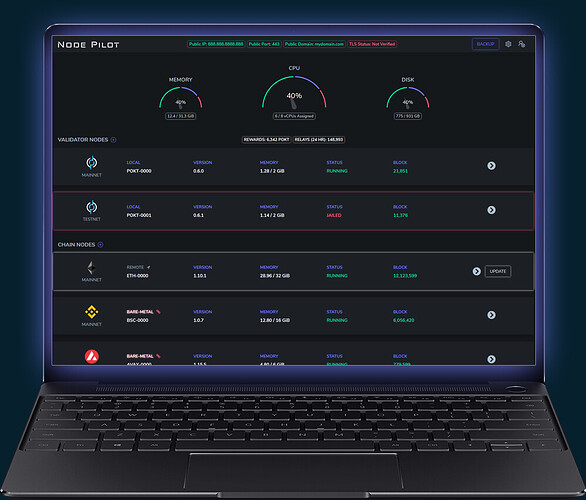 Shane and Ryan Burgett started developing Node Pilot shortly after POKT mainnet launched in August 2020. Shane was a full-time business development contributor to Pocket through most of 2019, and came on-board again in September 2020. Ryan is a full-stack crypto application developer with years of experience in the areas of wallets, interoperability platforms, mining, and node deployment.

The idea of Node Pilot came about after realizing the level of infrastructure competency that would be required for anyone to run a Pocket Validator. To get the Pocket Network to a place where there are millions of Validators serving applications, we believed there needed to be a solution that makes Validators approachable to the masses while adhering to the best industry standards.

There are some node management platforms out there like DappNode and AVADO, which are great for simple node deployment, but they lack the features required for someone to be an effective Pocket Validator operator. Validators that are not run properly become a burden on the network and affect the quality of our service. Node Pilot was designed from the ground up to be just as easy as these other platforms while providing important features that make for good Validator operators.

When everyday users don’t have a user-friendly, self-hosting solution, they only have one option, which is hosting services. These services are great, but Pocket needs to be an ecosystem with options, and a solution like Node Pilot gives everyone the freedom to be an independent Validator operator and overcome the technical barriers that exist today.

Launch Node Pilot as free software that any can be used to deploy and manage Pocket Validators and other blockchain nodes. Node Pilot installs with a few copy-and-paste commands on a Debian-based Linux and is 100% GUI driven after that, making it approachable to users of all technical levels.

Node Pilot fully utilizes Docker to ensure best practice security, resource management, and updateability. This would be the only Pocket Validator deployment tool that is built entirely on Docker orchestration, making updating standardized across all supported blockchains. Node Pilot is simple enough to be used by small node runners, but also can be used by advanced users for multi-instance orchestrations.

Node Pilot also provides a direct response to the general community who have asked for an approachable Validator process.

No known dissenting opinions to a deployment solution like Node Pilot.

Collectively, Shane and Ryan have put in over 370+ hours into this project. Including 277 development hours thus far. Beyond the time already invested, Shane and Ryan expect to continue contributing to ensure updating continues in critical areas of:

Instead of asking for a budget prior to showing work, we opted to develop first, prove the value of the software, and then ask the community and DAO to gauge if it’s worthy of reimbursement as a free tool for the community.

Development Goals Beyond This Proposal 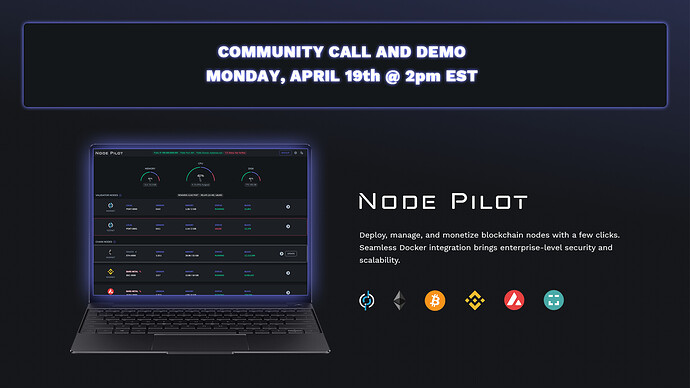 Completion percentages in Deliverable(s) have been updated (4/28/21)

This looks amazing and mofongo for all the work you’ve already put into it! This will work as a crazy lead magnet I’m sure.

Am wondering how me and @JaureguiA will play a role in this, if at all? From my understanding this serves to be beneficial for anyone running validates, not just specifically POKT.

Am excited to hear more!

Can’t wait to see this demo!

This will work as a crazy lead magnet I’m sure.

Agreed. If Node Pilot is the most effective way to spin up X nodes, then that’s just another angle we can use to create a connection with that project/community. It opens the door to encourage them to then monotize those X nodes with Pocket.

Pocket is perfect to allow other chains’ validators to “double dip” in the rewards. Run a validator on X chain, and monetize it again via Pocket. Node Pilot is perfect for those kind of strategies.

Am wondering how me and @JaureguiA will play a role in this, if at all?

You guys are welcome to use any community events or products as marketing tools. Use community and DAO activity to show Pocket’s energy. Active communities grow… if people know there is activity.

Exactly! It is primarily targeting Pocket right now, but really it is the easiest way possible to start any chain supported by Pocket. Look on YouTube for how to run each of the different chains supported by Pocket lol. It’s wild, watching folks enter terminal commands for thirty minutes to show how easy it is to get a node up. We have invested the time and energy to make starting a Pocket node or any chain as easy as one click.

Thanks for the support everyone! Between this post, the community call, DMs, and Pocket’s Discord, we have received a lot of positive feedback and seen dozens of deployments so far.

We have submitted this proposal to the DAO for their vote. DAO members can vote here.

This proposal has passed with 6 yes votes and 0 no votes. The results can be viewed at the link @shane shared.