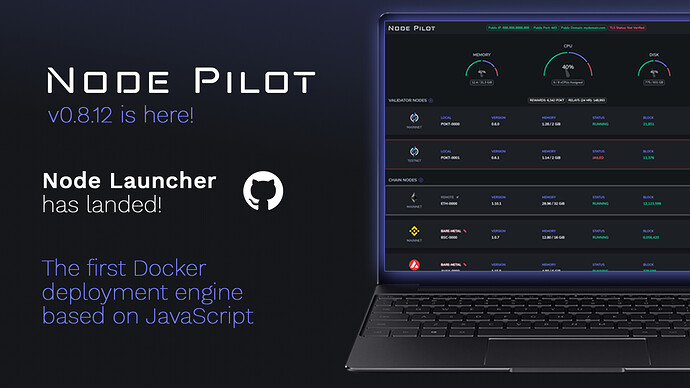 The Node Pilot project is now almost one and a half years old and has been used to deploy hundreds of nodes and with 150+ mainnet POKT validators while in beta. Not only has development continued, but has led to the development of a powerful, open-source, node deployment engine called Node Launcher. While our April proposal reimbursed this project for much of the cost for the prior 7 months of development, we now want to introduce Node Launcher and ask for continued support to fund these free resources.

Shane Burgett and Ryan Burgett started developing Node Pilot shortly after POKT mainnet launched in August 2020. Shane has been a full-time contributor to the Pocket ecosystem since 2019, first working in areas of business development and customer support and is now focused on Node Pilot and community support. Ryan is a full-stack crypto application developer with years of experience in the areas of wallets, interoperability platforms, mining, and node deployment.

Node Pilot has been a direct response to RFP-7: Node Deployment Tools, and we are now hitting a new phase of the project. After publicly launching the Node Pilot Beta back in April, we quickly realized scaling to more chains was going to create a lot of technical debt. At the time we were hard-coding docker files into Node Pilot and we knew we were going to need a better way to standardize how nodes can be deployed and updated. So instead of managing repositories of docker files (like DappNode and Avado do), we set out to build a programmatic platform that would act as a standardized toolkit developers could use to create other node deployment applications.

This resulted in the creation of Node Launcher, a node deployment engine written in TypeScript that enables the easy creation of node deployment applications. With a few lines of JavaScript, an application can deploy and manage Docker based nodes and validators. This mitigates the need for CLI, bash scripts, or wrestling docker config files, as developers can programmatically build full stack blockchain applications, similar to Node Pilot, using only JavaScript.

Node Launcher has now been used by independent node runners to deploy hundreds of chain nodes via Node Pilot. To showcase Node Launcher’s abilities to be used for other applications, we have created an open-source demonstration app built with only Electron and Node Launcher. It is a simple Geth node launcher that was built in a few hours and shows how an application is able to launch and manage docker containers with only JavaScript via Node Launcher’s APIs.

Our desire is to grow this library to be an approachable tool for creating a new category of node deployment/management applications. Developers can create their own multi-chain, multi-shard, multi-client, multi-network deployment applications in a standardized and open way that can stay up-to-date with the latest client software. 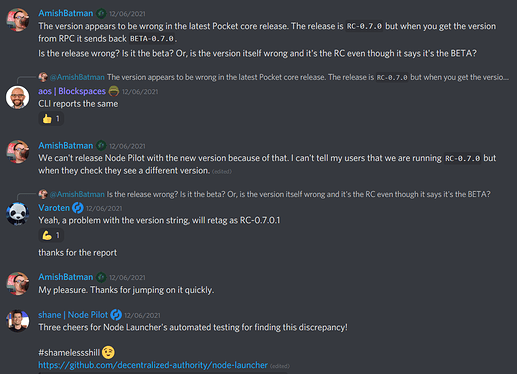 Instead of asking for a budget prior to showing work, we opted to develop first, prove the value of the software and tooling, and then ask the community and DAO to gauge if it’s worthy of reimbursement as a free tool for the community. This approach has been encouraged by the community and follows our April proposal.

Development has increased significantly since April, and a runway budget would enable momentum to continue uninterrupted. We are in the process of diversifying our funding by doing integrations with other chains like Fuse and Harmony. This will enable Node Pilot and Node Launcher to be cross-community projects and spread the funding burden.

Because of this, we are asking for a 50% runway to set us up for the next 7 months. We plan to make up the other 50% from the other project integrations. There is a good chance we will need to scale our team in 2022 and a runway would help make that a possibility.

Development Goals Beyond This Proposal

Node Pilot allowed me to start validating Pokt Network. I’ve run nodes before and I was impressed on how seamlessly it is to do it with node pilot, plus all the benefits they have been taking care of like: node updates, new functionality upgrades, new chains, security, better use of resources, etc.
Also, Shane and Ryan have been doing amazing work responding to anybody in discord and helping them start running nodes.
Looking forward to new milestones of node pilot and keep supporting Pokt Network

Please, we (the people) need Node Pilot to be successful!!! For us, average non It people, it is crucial to have a Web3 solution like Node Pilot that allowes us to participate in Web 3 projects like Pocket Netwrok. Me and my friends are not able to utilize Pocket as it is right now, we don’t have the coding skills / IT background to do so. I think Pocket needs a user friendly (simple to install and use) solution like Node Pilot to reach mass adoption. The more Nodes are deployed the faster and more secure Web 3 will evolve. With Node Pilot Pocket can become a major force in disrupting the centralized Web 2. Even though I have zero coding or It experience I was able to successfully install Node Pilot. Now I am a part of Web 3 and will advise all my friends to follow my / your lead. A couple of weeks ago I barely knew what web 3 is. This is all due to Node Pilot based on Pocket Network. I am truly grate full for this experience and looking forward to continue my journey on Pocket Network via Node Pilot. Kind regards “Marsvikings#5090”

Node pilot helped me set up pocket nodes in 1 day eliminating my dependency on third party node providers and saving me time and cost, I am truly thankful for this product.

I would just like node-pilot to be fully open source, including the UI so we community members can also contribute and take some load off of the main team.

I’ve worked with @shane for some time and I fully support this proposal. Node Pilot is already paying dividends for the community and is likely to be a key piece of infrastructure for those looking to run nodes without relying on third-parties. I’m looking forward to see how this progresses.

I support this proposal without reservation.

NodePilot and the underlying NodeLauncher engine are a valuable addition to the ecosystem.

Nothing but support here. Node Pilot eased my onboarding as a node runner immensely. I’m sure with everything coming down the pipe it’s only going to get better and continue to enrich the network.

I was able to setup 2 POKT validators in no time using Node Pilot, the process is very simple and straight forward when you follow the Node Pilot setup documents. Appreciate the hard work of Node Pilot team and looking forward to much more enhancements to Node Pilot in the coming months.

I am a man of few words and node-pilot is a platform of fewer clicks. Someone brought Pocket Network to my attention. After two weeks of research I was able to deploy a single node on AWS. After discovering NP, in a quarter of that time, I was able to deploy multiple instances of the software including pokt nodes and various chains. It’s just a thing of beauty. Kudos to the whole team for their hard work and contribution to decentralization. We look forward to more integrations including harmony. Keep up the good work

Node pilot has taught me a lot about Pocket and has given me a hands-on, technical on-ramp to how pocket works. Because of them and their willingness to assist, I got my first self-hosted node up and running.

Node Pilot makes our life so easy for setting up the nodes, managing nodes and chains. Being very new to Node Running, NP helped me to learn so many things. Hats off to NP team and I highly support the proposal.

NodePilot plays an important part in decentralizing POKT further. Chain nodes are notoriously hard to run, add multiple nodes to the mix plus one or more POKT validator nodes and the task becomes quickly out of reach for most but the most technically competent. NP allowed me to participate in the growth of network with relative ease. I fully support funding them to continue developing NP.