Currently our governance will take place across two separate platforms: Discourse and Snapshot. Proposals will be published and debated on Discourse, then cross-posted to Snapshot for voting.

Improve the Voter UX by:

Do the above by building a Discourse plugin that integrates Snapshot functionality.

Vastly increase community participation in the proper channels by creating an omni-channel experience.

Definition of the Project 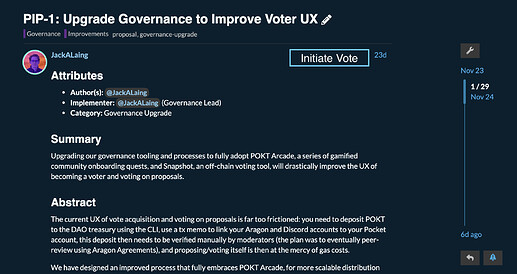 Initiating a vote should lock the topic so that the author can’t edit the details of the proposal after voting has begun, or require the author to cancel the proposal in order to make changes.

For examples of previous attempts to integrate Discourse with a voting dashboard, see Tezos Agora

How to Test Progress & Measure Results