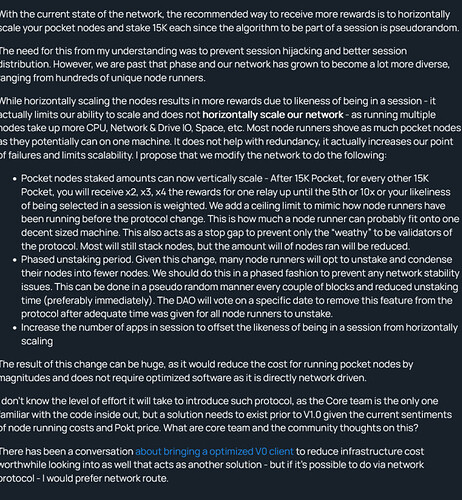 I believe this solution does create an incentive for stake consolidation of nodes, which in turns diminishes infrastructure costs. However there’s a few underlying considerations that I want to highlight as we keep seeking for creative solutions such as this one:

Whenever we explore a solution, we must always take into consideration the side-effects, and even if more mechanisms can be created to combat these side effects, the increase in complexity must also be a factor. With that said, I believe this solution is worth exploring.

I think the auto-compounding feature is probably a great solution from a node-runner-experience point of view.

However, in the spirit of exploring this solution while minimizing side-effects, I think we could leave 15k thresholds in place to more closely mimic the current incentive structure:

I get where you are coming from, but even if we do this there’s no systemic defense stopping node runners to just auto-compound every session, causing the block bloat I mentioned in my previous reply, so we would be counting on good will and everyone running the correct implementation. We have seen in the past non-malicious actors trying to over-optimize and cause strain to the network while at it, so I just wanna make sure that we make the correct trade-offs.

What currently stops node runners from doing this?

I don’t think this would create any new incentives for that behavior, would it?

I’m suggesting we keep the 15k thresholds to alleviate this concern.

Right now, the network has a 15k threshold before compounding makes sense. We could leave that in place by forcing multipliers to be integers.

Will they? My suggestion is too floor to 15k windows. This means they will only benefit each 15k extra they stake

I’m trying to understand what this changes about a node-runner’s incentive to do this. Here’s my current mental-model, please correct it:

There just isn’t an incentive for nodes to do it.

This introduces no new incentives to send an “edit stake” transaction. Once you have 15k POKT accrued, it just changes that transaction from “stake a new node” to “edit the stake of an existing node.”

Caveats: In the initial transition, there will briefly be more edit-stake transactions as node runners consolidate, but that seems like a 1-off concern.

Additionally: node-runners might experiment in the future to find the optimal balance, but again it seems small compared to the spam-style risk you’re describing.

Maybe staking transactions should be more expensive, and maybe it is worth considering, but it seems unaffected by this proposal.

Is your point that it’s easier for operators to say:

than it is for them to say:

So we should increase the tx fee of a stake to explicitly discourage lazy operators?

edit ^^ I keep nit-picking my code lol, I think the idea is apparent so i’ll stop now.

One incentive this creates is that nodes will want to edit their stake every session,

So if there are 15k steps… wouldn’t it be easier for node runners to just automate staking any incoming rewards so once they hit the next 15k they start receiving their rewards immediately?

I think the issue here is there will be an incentive to automate staking increases, even if the reward is delayed until the next 15k step is reached. If the majority of the network automates edit stake then it will create bloat which the network isn’t prepared for.

The issue is the risk of bloat and finding a protection from that from what I’m gathering.

Great minds think alike! (and so do ours)

It seems like weighting either rewards or session-selection would have a similar effect, with the tradeoffs being:

Session selection:
– Harder to implement
– State bloat / complexity
++ No change to rewards-consistency (but it doesn’t matter in the long run)

So I’m on board with the reward scaling (my condolences to node-services who will have to explain even wilder variations in rewards to every new customer).

Would they thought?, I certainly wouldn’t advise people to lock tokens up for 21 days with no benefit.

But I can see where your getting at! It wouldn’t be hard to put barriers in place for this i.e. a stake request will fail if it doesn’t bump up into the next 15k bin